Fungi offer a number of lessons that we humans have only begun to acknowledge. They bridge the gaps between life and death, turn dead matter into healthy soil, are extremely adaptable, and function in community. Now we can add sexual empowerment to the knowledge that can be gleaned from our fungi allies.

A recent study was published at the University of Wisconsin-Madison which documents the intimate symbiotic relationship between plants and fungi, specifically mycorhizzae. The UW study demonstrates the complexity of mycorrhizal interactions within a single plant cell. The most intriguing find is that fungi ask for consent before penetrating the plants’ cell wall. The mycorrhiza only continues to work in conjunction with the plant once permission is granted to make that penetration a beneficial experience for all parties. That’s right, fungi practice positive consent!

The science breaks down to this: the fungus announces its presence (and perhaps intention) with a mechanical and/or chemical signal to the plant. If the plant wishes to engage in a symbiotic relationship with the fungus, the plant will then construct a tube in which the fungus can grow and penetrate the plant. Only when the path is completed can penetration begin. This sheds light on a whole new level of nuance and complexity within relationships in the natural world which, not surprisingly, is more multi-faceted than our science has originally thought. While there’s much to say for the idea of science, who its accessible to, what it neglecting in scope, and the patriarchal and colonial biases under which it’s been created and presented, science has undeniably contributed to greater understanding in our society and it’s important to extrapolate (cautiously) and use science in conjunction with other realms of thought.

In the case of this study, positive consent amongst plants and fungi can be applied to our current sexual paradigm here in the west. There is a burgeoning movement to normalize positive consent and sexual empowerment, and advance reproductive justice. This new behavioral finding mirrors the concept of “Yes means yes”, which requires affirmative consent, in which silence or lack of protest or resistance cannot constitute consent. “Yes means Yes” aims to de-shame sexuality and instead celebrate pleasure amidst a growing backlash towards rape culture. How can we practice biomimicry or, more specifically, mycomimicry for a just, thriving, and sustainable world? 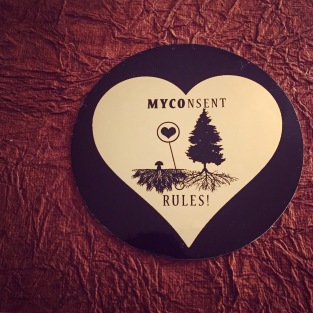 What is so amazing about these relationships is that the plants open themselves to the  fungi and construct a special place for the relationship so that it has room to exist healthily without invading the space or rights of either organism. For this reason, the relationship is greater than both entities combined; it is a co-creative process which allows magic to happen. It is only when this space has been fully created that the fungi will penetrate the plant and the symbiotic relationship may begin. In short, looking for a healthy, mutually beneficial relationship with a sexual partner? Ask for consent, communicate, and make space for the relationship.

About the Author
Lauren Olean is an herbalist and co-founder of the Moon Mamas Collective. She is passionate about witch empowerment, reproductive autonomy, and the intersection of mycology and community. When she’s not making medicine or reading and writing about patterns, she’s probably in the woods looking for mushrooms and hanging with the fairies. Lauren currently lives in Olympia, WA.