It is spring in the Appalachians and Montgomery County, VA residents peer outside their windows and see the snow slowly melting, the first green buds in the distant hills. A certain breed of springtime fervor is in the air. The biodiverse Central Appalachians and neighboring Smokey Mountains, nearly a temperate rainforest, home to endemic flora and fungi that traveled down from the north during the last ice age, set the backdrop for the awakening green. This time of year is defined as the most beautiful, by resident Rebecca Rader, graduate of nearby Radford University and long-time resident of Montgomery County. She terms this land a “naturalist’s paradise,” home to bird and butterfly enthusiasts, native plant and wildflower societies, Master Naturalists, a Sierra club chapter and more, but there is another organism that draws Rebecca and neighbors’ devout attention: mushrooms.

For Rebecca, her love lies deep in the ground. The first signal arrives when the tall, symmetrical tulip-poplars burst into life, the first native trees to leaf-out in spring, heralding the long-awaited, brief advent of one of the most sought-after mushrooms. Local residents throughout the Appalachian mountains pull out their maps, contact neighbors, and prepare for an earthen-hunt for the mushrooms known to make men travel for weeks to other counties, women to arise early in the morning with baskets in hand, a hunt repeated each year with more fervor and some fever: morel-hunting.

“In our area, most mushrooms come up in late summer and fall, but morels come in early spring.  Morels signal an end to winter and new beginnings; it’s a great time to spend in the mountains- it is so beautiful.” Rebecca, the Executive Secretary of the North American Mycological Association, is part of a “citizen science” effort to collect data for the burgeoning interest of the scientific community, and has a long history with morel hunting. “I have a deep love and connection with them. I love that they are intertwined with the roots of the associative tree. Morels can be mycorrhizal and symbiotic in that way, or even saprophytic. The morels that we hunt are mycorrhizal, by-and-large, and are associated with different trees in different parts of the country. The organism is living in the soil with the tree roots, year after year after year, shooting up fruiting bodies for such a short period of time, that it is magical.”  The process of the hunt, understanding where morels live, the times when they will most likely appear, furtively mapping sightings, charting the progress of fruiting bodies from the south to the north, and their consistantly elusive nature, creates an intoxicating relationship, a driven connection with morels.  “There may be a 3-week window in a certain spot that it may appear,” explains Rebecca, “it is so magical to be rewarded by finding them. It’s a Fever! I have a lot of friends that are completely consumed with it at this moment.”  For some morel hunting has even become tradition, a sort of ‘rite of spring,’ according to Rebecca.

It was 1997 and Rebecca was browsing around her local library. She stumbled upon some books about mushrooms and decided to go into the park next to library to see what she could see. From that day forward, she became completely engrossed in mycology. It would be 2 years later that she would cross paths with one of the greatest living mycologists, Dr. Orson Miller, and his wife and co-author, Hope Miller. At the time, Dr. Orson Miller was the Associate Professor of Botany and Curator of Fungi at Virginia Tech, and Rebecca was encouraged as a community member to join the VT graduate students gathering and identifying mushrooms. This relationship with Dr. Orson and Hope eventually led Rebecca to the wider mycological community, through the North American Mycological Association (NAMA). “In 2004 I had gathered some Chanterelles and cooked them and my stomach started hurting. I called Dr. Miller and realized that he was not home and ended up speaking with Hope. We determined that I had not, in fact, poisoned myself, I just can’t digest Chanterelles, but during that conversation, Hope encouraged me to join NAMA.  She told me that, fortuitously, the annual foray was in nearby Asheville, NC that year. I went to the foray, got involved in NAMA and in 2011, I became executive security.”

At the foray, Rebecca was introduced to Allein Stanley, an early member and past president of NAMA who has been involved for over 40 years, and Coleman McCleneghan, an academic mycologist. These two influential women in North Carolina offered encouragement to Rebecca as she was starting her journey, along with other important female and male mycologists. “You know what is amazing about the field of mycology? All the interconnectedness we have, a field where you can really meet your heroes, meet with the people doing the important work. Anything else you are interested in, like art or music, it would be hard. It is sort of a small community in some ways, the mycological community. I can’t believe the opportunities I have had. Gary Lincoff was one of the first people I met in Asheville in 2004 and I was star-struck. Since then, I have had the opportunity to learn from him and hear him speak many times.”

“Mushroom people are just the best people,” expresses Rebecca, “I have met so many people who are unique and friendly and enthusiastic; I have met super intelligent people and all sorts of talent that converge around fungi. I think that people who have bothered to discover the amazing world of mushrooms probably have an edge and tend to be more creative.  Maybe people that like to learn, who are interested in alternative things, like how mushrooms can save the planet, like Paul Stamets teaches.” 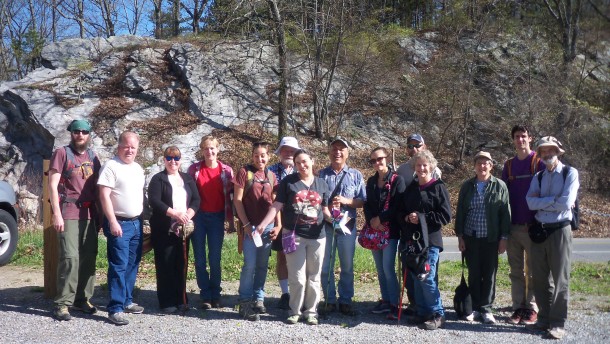 “I thought I could wait for someone to do something or I could do something myself,” remembers Rebecca regarding her decision to begin a local mushroom club. “I was a little scared and did not know if I was ready; I was not a professional mycologist AT ALL nor had I any formal education in mycology, but I realized if I waited until I was ready then it would never happen.” Despite feeling unprepared, Rebecca forged ahead, creating a thriving mushroom club, “Currently, we have around 150 people that get the communications through the Google Group, but a smaller core of about 30 people that come to meetings regularly.  Club members work at inventorying area fungi and adding to the existing body of mycological knowledge, including member John Ford’s work on the late Dr. Orson Miller’s remaining collection of specimens at the Virginia Tech Herbarium.”

No matter the size of the group, being with community in mushrooms is something Rebecca sees as important, to learning, but also to fostering joy and deep connection. “Studying mycology has always been fun, but I learned a lot more when I got connected with people. I had a lot of doubts when I was on my own in identification and this was in the days before internet was the source of information that it is today. Definitely joining NAMA was when I started really learning. It was very important to connect it to my life in a social way.”

Rebecca describes her approach to philosophy and religion and purpose in life as “intuitive,” and feels like that intuitive connection extends to fungi.  “I feel like everybody has a path in life and sometimes it is hard to know,” she says, “Sometimes I feel like I have to sort of struggle to see my path and to really listen, but if I go with the flow, there is a lot of synchronicity in my life and I feel like fungi have to do with that: the connections with people, opportunities, and our connection to the natural world.”  In a fast-paced society, it is easy to loose the connection to mother earth, and for Rebecca “fungi help me feel my way along this path.  Modern life tries really hard to separate us from nature, from that which bears us and sustains us, but fungi, literally and figuratively, bridge that gap.”

Resources Rebecca suggests for aspiring mycologists or that have helped her on her own path: 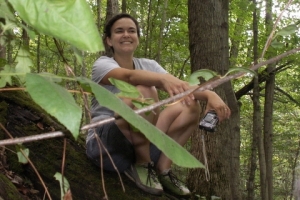 Rebecca works full time as a wine consultant for Kroger, Christiansburg,  where she manages the wine department. She also creates batik clothing, art in and on fungi, and does photorealistic portraiture with the support of her husband of 16 years, Chris.  Her work can be found on Facebook and at rebeccahraderartist.com.  Outside of work and her NAMA responsibilities, she leads groups regularly for walks and talks.  When not organizing people, she enjoys meditative time for herself in the woods.

The What & Why of Honoring “Womyn of the Month”
Womyn of the Month recognizes womyn scientists, activists, community organizers, humanitarians, and other womyn that are making a difference in the field of mycology or alongside our fungal friends.  If you would like to nominate a womyn for this honor, please contact us at womynsmycology@gmail.com.

5 thoughts on “Womyn of the Month- September 2014: Rebecca Rader”

New #sporeprint #art by @daughter_ofthe_woods 💕🍄🤗
@_kallenmikel 💕 #beautiful #mycology #art
New #mycology program at @paulsmiths boasts #fun + #creative learning with many amazing women teachers! Check out more at at paulsmiths.edu or in our new article by Hannah Huber: tiny.cc/mycopro . . . . #femaleandfungi #womeninscience #stem #ecology #paulsmiths #womenleaders #environmentalist #foraging #taxonomy #scienceiscool #natureisbeautiful #mushrooms #fungi #connect #learning
Shout out to @edsonfarms.tc from #traversecity #michigan where I’ve been so fortunate to have spent many #beautiful years! Thanks @medicinacello for this beautiful photo
@holy_sponge natural #mushroom printed #menstrualpad 💕💕🤗
#santaclause + #amanita = #achristmasstory 🍄#happyholidays
Tonight (Tuesday) will be the release #party for the first @radmycology #Mixtape! The event will be in #Portland, OR at 8pm and will also be live-streamed on the #RadicalMycology Facebook and Instagram accounts. The show is going to be pretty special with rare performances and gift giveaways, so be sure to tune in! . Thanks to @madelinecass for the amazing poster #art! . Full details here: https://radicalmycology.com/2017/12/11/radical-mycology-release-part-and-livestream/
Nice work @studiokathi ! 💕🍄
%d bloggers like this: